For my avid readers, you’ll know that I have a penchant for interior decorating programs. To fuel my addiction, Summer Home is the latest series I’ve added to my growing list of favourite home makeover shows. What makes this series unique is its focus on renovating summer homes – or holiday homes as we call them here in Australia. In each episode, host Samantha Pynn, aims to update rundown retreats trapped in a time warp, and transform them from boring to delightful getaways.

The program has a laid back vibe that’s reflected in Samantha’s signature style. I have an affinity for her refreshing approach to decorating; it’s what I define as casual chic. With Samantha, you won’t find ostentatious fixtures, opulent or ornate focal points and quirky decorating concepts. Instead, Samantha’s creations are bright, cosy and inviting. Her designs are based on restrained elegance, understated rustic glam. She combines country with a classic, timeless comfort, yet modern feel.

Samantha provides practical solutions to breathing new life into a home. Where possible, she retains existing furniture to minimise costs but refreshes the pieces with new slip covers or re-upholstering. In addition to custom fixtures, Samantha also favours vintage accessories found in local thrift stores or antique shops to maintain a cottage charm.

As the homes of her clients are often located along rivers, lakes or set amongst wooded areas, her designs are often nature inspired, so as not to divert from the character of the house. To keep the look fresh, she uses pops of colour with visual elements such as pillows, throw blankets, rugs and ornaments with soft colour pallets, floral prints mixed with muted geometric patterns and delicate textures.

In some episodes, Samantha’s major challenge is maximising areas with limited space, creating a room that is both functional and flexible in terms of their layout, purpose and usage. She often achieves this with a splash of paint, new flooring, re-positioning furniture, adding fixtures with sleek minimalist features, dismantling walls or building cabinetry upwards instead of outwards – all to create the illusion of space.

In summary, Samantha manages to combine both function and form, transforming rooms that once lacked any artistic direction, and injecting a dash of glam that is visually eye catching yet comfortable and casually stylish.

One of my greatest fears in life is public speaking. I’d rather jump out of a plane nude, or walk barefoot through a pit filled with hairy tarantulas!

Recently, my little sister asked me to make the customary ‘family member’ speech at her engagement party. I was deeply touched and honored that she considered me, but at the same time I wanted to wet my pants (and throttle her)! Deep down, I secretly thought this was payback for all the times I threatened to flush her down the toilet when we were younger. My stomach began to churn and twist in knots. I had two months to come up with a speech and the pressure was on!

Some people are gifted speakers, me….not so much. As a student, at the end of each term, my report card read – “C is a conscientious student but needs to participate in class discussion”. It was a recurrent theme throughout primary school and high school, much to the disappointment of my parents! Despite the many lectures from both my teachers and the folks, it was a lesson never learned and haunts me to this day.

I can’t recall the source or quote the exact statistic, but according to a survey conducted, a significant number of people would rather die than engage in public speaking. OK, it’s a tad extreme but I can more than empathize with the thought.

I’m painfully shy! I liken myself to an awkward, country church mouse with hermit tendencies. I was the wallflower in high school that never got asked out because I was socially inept with zero personality. Men weren’t exactly queuing up for a date during my footloose and fancy free twenties because I couldn’t chat any guy up (it didn’t  help that I tried to save myself for Brad Pitt)! 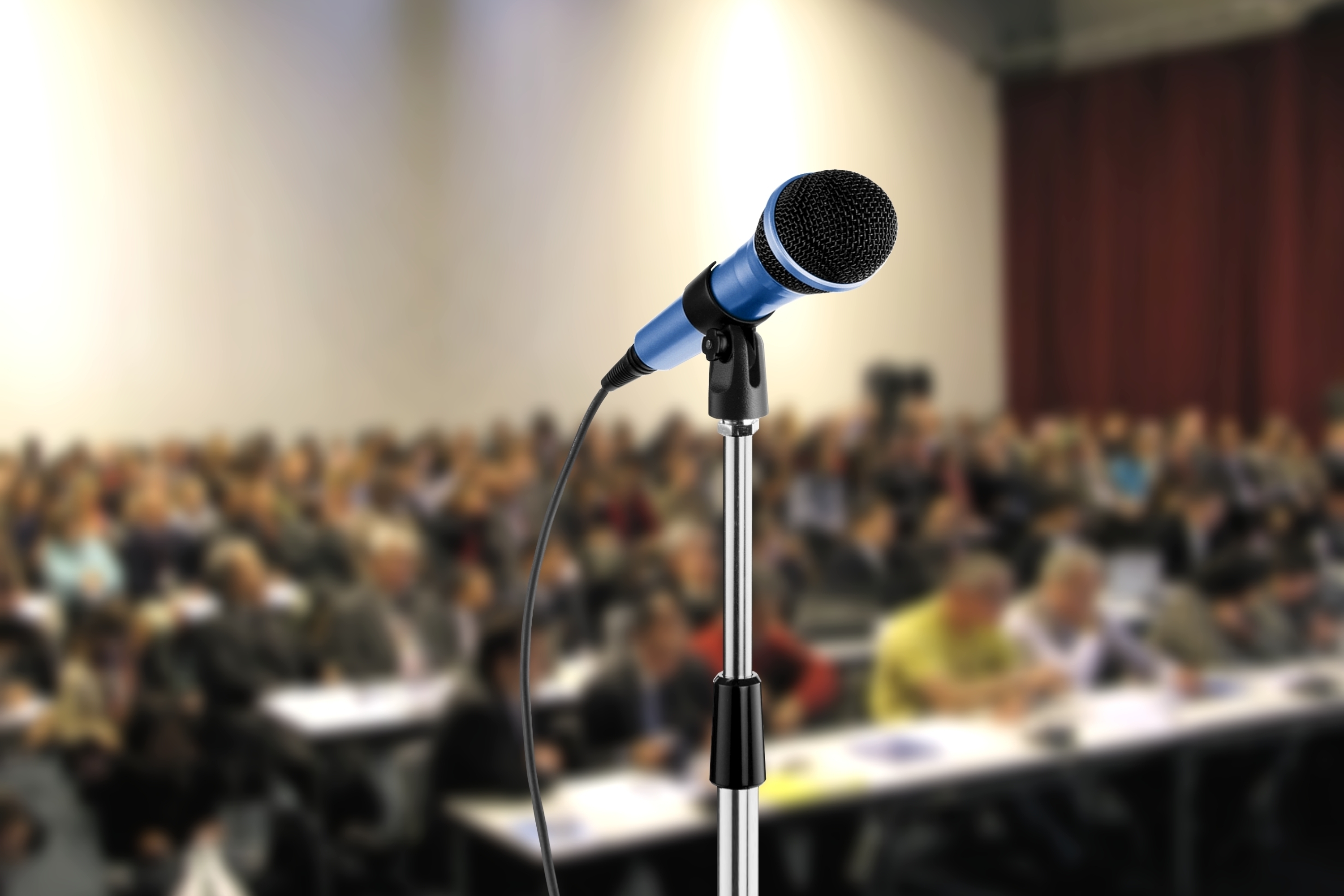 I’d still be single, desperate and dateless today if the better half hadn’t have made the first move. He was brave enough to introduce himself when we first met. I think he felt sorry for the loner in the tight skirt and knee high boots leaning up against the bar with vodka in hand.

Some people love the sound of their own voice; you know the ones who could talk under water? I’m in awe of those who can dominate conversations over the dinner table or board room meetings. I envy people who are gifted speakers, the best of which can mesmerize and captivate an audience. It does help if you ooze a little charm, personality and charisma. Personally, I believe you’re born with it, it’s an innate talent.

By contrast, talking is my weakness, my Achilles heal. Place me in front of a group of people and this weakness is elevated ten fold and I’m overcome with paralyzing fear! I start to quiver, sweat uncontrollably and I turn into a jibbering idiot. My mind freezes up and turns blank; I struggle to articulate what’s in my head (which isn’t much). Don’t get me wrong, I love attention. I don’t mind walking into a room, wearing something glam with a touch of bling and turning heads. However, when I open my mouth, I struggle to come up with something sharp, witty or profound to say. It’s a challenge to convey a message in a succinct, articulate manner – instead, I fall flat on my face (I guess this explains why writing is my escape).

My saving grace has always been my writing. Whenever I had to conduct presentations or meetings at work, I had notes prepared for my own sense of security. So, that’s where my mission began. I began to draft my speech until I realized I had no idea what to write! The avid blogger was suffering from writer’s block! I had to get down to the basics. Like with any good story, you need a captivating introduction, a memorable plot with a middle section that takes the audience on a joyride and a conclusion to tie up the yarn.  I channelled in my marketing experience and similar to a sales pitch, you need to have key objectives and an understanding of your target audience and what they’re after. Research is the key – a broad knowledge and understanding of what you’re talking about!

My ultimate goal was to create a light hearted message about my sister’s road to romantic bliss while hoping the audience didn’t suffer through sheer boredom, and the means to achieve this was to add some humor to the speech. I didn’t want to go down the path of the boring mushy lovey dovey clichés that you find in a Hallmark card – love is a journey not a destination, love is patient, love is kind – Blah! Blah! Blah! What a crock! That makes me gag. Instead, I wanted DIRT, that is, the crazy shenanigans that the youth of today get up to (ideal for my young audience). So I contacted close family and my sister’s friends to dig up some gossip which would form the bulk of my speech.

I certainly didn’t want to write a thesis. I wanted to keep the speech short and sweet – the less time I have to spend talking…the better! Once the speech was written up, the next stage was to practice, because practice makes perfect! I began to rehearse, I’d pace up and down the hallway rehearsing, varying my tone of voice and ensuring the delivery of each joke was perfect. On several occasions I even sat in front of Winston the Wonder Dog and read through my lines. After several rounds, eventually my own dog got bored! He’d look at me perplexed before dozing off. It got to a point where he’d walk the opposite direction as soon as he saw me approaching him. The paw thing, even my own dog got sick of the speech. That wasn’t a good sign!

As the date of the engagement party loomed, I couldn’t sleep. I began to get hives! Even as I slept, my mind raced through what I was going to say. On the day of the soiree, I needed a calming mechanism…..booze! Copious amounts of alcohol helps…it’s the best social lubricant….as they say, booze make men brave and women loose! After a few glasses of vodka, Bacardi and gin – I was rockin’!!!

With paper in hand, I began the speech. I started off strongly, despite the fact my hands were trembling. If I could measure the amount of quivering, it would be off the Richter scale. I lost my spot once but quickly brushed the mistake off. Once the audience laughed at a few comical gags, I knew I was on fire. To my sister’s relief, I didn’t disgrace myself!

In summary, I survived! Woo hooo! Would I ever volunteer or yearn to be nominated for any future public speaking events? Well, like I said earlier, I’d rather jump out of a plane nude, or walk barefoot through a pit filled with hairy tarantulas!

There’s nothing like summer in Melbourne, especially as Christmas approaches. The city’s lively atmosphere steps up a gear and comes to life even further as the festive season kicks in. Christmas brings such a spirited, vibrant buzz in town. The garlands are hung, decorations adorn street lamps and shop windows are decked out with glistening ornaments and flickering party lights.

The mood around the CBD is laid back, yet pulsating and infectious. As you stroll along the city streets, you’ll find yourself weaving in and out of the large crowds of people, some of whom have taken to the festive spirit by donning reindeer antlers or Santa hats. It’s hard not to be captivated by the light entertainment performed by an eclectic mix of buskers and carollers scattered on the corner of busy intersections or positioned outside retail department stores.

The smorgasbord of bars, cafes and restaurants is the heart and soul of Melbourne. Personally, it’s a great city to wine, dine and ultimately to relax as you gear up for Christmas celebrations. The tantalising aromas wafting through the air from some of Melbourne’s finest eateries combined with the large number of funky pubs and clubs only adds to the sizzling energy and ambiance of this great city.

The hedonistic fusion of awesome music, delectable food, cocktail of drinks and great company is hypnotic to the senses and further intensifies the joy and merriment one would experience at this time of the year. Melbourne certainly knows how to turn on the charm to build up a cheerful party vibe full of reverie. You’ll wish to soak it in and bottle it up

I love Christmas, especially in Melbourne!

Hardware Lane, worth visiting for a bite to eat
Image Source: The Vibe 101

The GPO at Melbourne
Image Source: The Vibe 101